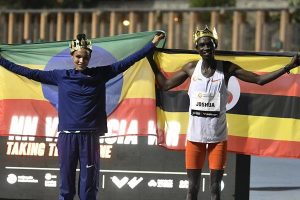 The monumental performances of Ethiopia’s Letesenbet Gidey and Uganda’s Joshua Cheptegei, to break two of the sport’s most revered world records within one glorious hour, have been officially ratified.

Gidey went first, producing a stunning run that clipped more than four seconds from the previous record set by Tirunesh Dibaba 12 years earlier. A few minutes after the 22-year-old crossed the line, Cheptegei took his turn, churning out 25 laps of the track in an average of less than 63 seconds apiece to better Kenenisa Bekele’s 15-year-old benchmark by more than six seconds. The records for those two events had never been broken on the same day.

The two-race meeting was held at the Spanish city’s intimate Turia Stadium before a crowd limited to less than 150 due to Covid-19 pandemic restrictions.

That scene was in stark contrast to those in Oslo, on 6 June 2008, when Dibaba took command of the world 5000m record with a 14:11.15 run and three years earlier, in Brussels on 26 August 2005, when Bekele clocked 26:17.53 to clip 2.57 seconds from his own year-old mark. The roar of capacity crowds at the events, both fixtures of the Golden League series, were crucial in those record assaults. In Brussels, the pulsating beat provided by an African expat drum orchestra added to the thunder produced by the crowd of 47,000 that packed the King Baudouin Stadium.

That was absent in Valencia, but it didn’t seem to matter to either Gidey or Cheptegei whose phenomenal form and singular focus landed both in the record books. For Cheptegei, whose performance came 54 days after he broke the world 5000m record in Monaco, where attendance was also restricted, the circumstances of the setting wasn’t anything new.

“I wanted to show the sports lovers of the world that the track is exciting," said the 24-year-old, who became the 10th man to hold the 5000m and 10,000m world record concurrently.