Mihambo soars out to 7.30m to win the world long jump title 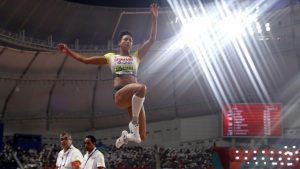 Malaika Mihambo was in a perilous position after two attempts in the long jump final. She took off from too far behind the board with her first attempt and her second jump was a sizeable foul.

Her only valid effort of 6.52m thus far would not have made the cut and would have abruptly ended the excellent unbeaten streak she has amassed outdoors in 2019.

But Mihambo made all the necessary technical adjustments for her third attempt and the European champion hit the board with the same speed and zeal, soaring through the rarefied air in the Khalifa International Stadium to an effort which put Jackie Joyner-Kersee’s long-standing championship record under some jeopardy.

"I was telling myself [after two jumps] the next jump is not going to be a foul. It is going to be something but I wasn’t trying to jump 7.30m - in the end it just happened.”