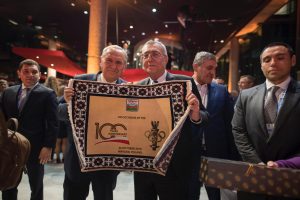 We would like to remark that the meeting of the EOC Olympic Games, European Youth Festival, Athletes, Olympic Culture and Heritage, Olympic Academy and other commissions were held at the assembly.

Also the presentations of the Tokyo 2020 and Paris 2024 Summer Olympics, the Beijing 2022 Winter Olympics, the Krakow and Malopolska 2023 European Games was listened by the participants of the assembly.