Hassan rebounds from fall to finish second in Valencia Half Marathon 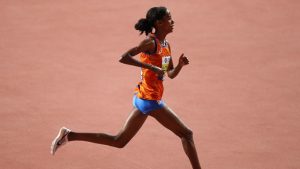 Sifan Hassan’s bid to break the world half marathon record of 64:51 in the Valencia Half Marathon came to grief in the early stages when she took a heavy fall in the eighth kilometre but the Dutchwoman picked herself up and was still rewarded with a fast time in her closing race of the 2019 season.

Hassan was positioned towards the front of the leading elite women’s group when she was tripped from behind, landing heavily on her left knee and hip. Hassan was at least able to resume the race but the world 1500m and 10,000m champion couldn’t regain significant contact with the leading group who were still on world record pace through 15 kilometres.

Still paced by one of her designated pacemakers, Hassan was running in third-place for much of the remainder of the race but the European record-holder picked off Kenya’s Joan Chelimo in the latter stages to finish second in 65:54 behind Ethiopia’s Senbere Teferi who set a national record of 65:33.