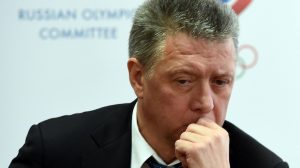 Russian Athletics Federation (RusAF) President Dmitry Shlyakhtin has been suspended by the Athletics Integrity Unit (AIU) and the national governing body he leads charged with serious breaches of the anti-doping rules, including obstructing an investigation.

The charges, which also include failing to cooperate with an investigation, relate to the conduct of senior RusAF officials during an investigation into "whereabouts" violations committed by Russian high-jumper Danil Lysenko, the 2017 World Championship silver medalist.

The AIU revealed the charges follow a 15-month investigation conducted by the body in cooperation with the Russian Anti-Doping Agency (RUSADA).

It concluded that RusAF officials had been involved in the provision of false explanations and forged documents to the AIU in order to explain whereabouts failures by the athlete.

RusAF has been issued a notice of charge for failing to comply with its obligations as a Member Federation.

The organisation is already suspended from the membership of World Athletics, dating back to November 2015.

RusAF has until December 12 to respond to the notice.

The AIU Board may then refer the matter to the World Athletics Council to be determined in accordance with the anti-doping rules.

A total of seven individuals associated with RusAF have been charged.

Besides Shlyakhtin, RusAF Board member and President of the Moscow Regional Athletics Federation Artur Karamyan has also been charged.

Elena Orlova, a senior administrator, and anti-doping coordinator Elena Ikonnikova are also those who have been suspended.

Lysenko's charge is considered a "second violation", having already been charged over his whereabouts failures - meaning he could be banned from the sport for life.