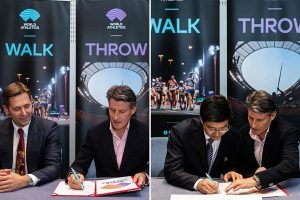 Belgrade’s Stark Arena, which seats 18,386 for sporting events, has been used for the 2009 Universiade, the Davis and Fed Cup, the World Championships in karate, and the World Cup finals in volleyball.

The Chinese city of Yangzhou has been confirmed as the host city of the 2022 World Athletics Half Marathon Championships.

Yangzhou, a city of 4.5 million people, stages an annual Gold Label half marathon. The course records of 59:52 and 1:07:21, set by Mosinet Geremew in 2015 and Peres Jepchirchir in 2016 respectively, are the fastest times ever recorded in China.

The World Athletics Council announced today that the Russian Athletics Federation (RusAF) reinstatement process has been suspended, pending the resolution of the recent charges brought by the Athletics Integrity Unit.

On Thursday (21), the AIU charged RusAF with obstructing an investigation and provisionally suspended several senior federation officials for tampering and complicity.

The Taskforce, chaired by Rune Andersen, made the following recommendations that were approved by Council: