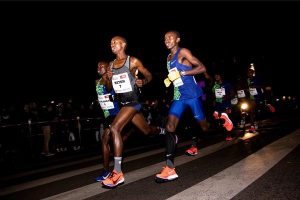 Robert Keter’s world 5km record of 13:22 has been ratified.

Keter, who was something of an unknown when he lined up for the Urban Trail Lille 5km on 9 November, upstaged a quality field to take seven seconds off the previous world record.

Keter made his way to the front before the second pacemaker dropped out, but three fellow Kenyans – Stanley Waithaka, Davis Kiplangat and Gilbert Kwemoi – were all close behind. Those four men began to pull away from the other athletes in the lead pack with less than a mile left to run.

There was a relatively tight turn at 4km as they looped back on to the Boulevard de la Liberte, but Keter got there first and started to increase the pace for the final kilometre. He continued to pull away from his three compatriots and they were unable to match Keter’s finishing pace.

Keter turned into the Place de la Republique with a clear lead and crossed the finish line in 13:22, breaking the previous world record set by Switzerland’s Julien Wanders in Monaco on 17 February 2019.