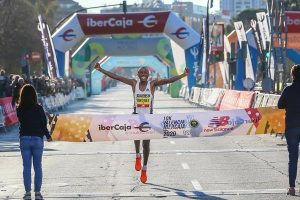 Kipruto’s world record marks came when winning at the 10k Valencia Ibercaja on 12 January. The world 10,000m bronze medallist from Kenya dominated the race, passing through 3km in 7:59 before dropping the last of his challengers.

Sasha Zhoya’s run in the 60m hurdles (99cm height) on 22 February 2020 was the highlight of the French U20 Championships in Miramas.

But just 70 minutes later, Zhoya was back out on track and went even faster, winning in 7.34.