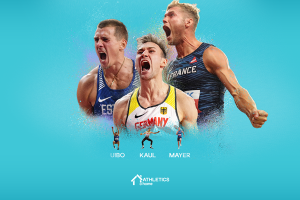 The competition will begin with the pole vault where the athletes will attempt to clear 4.00m as many times as possible during a 10-minute period. They'll then move on to the shot put where the challenge is to send the 7.26kg iron ball beyond a 12-metre line as often as possible, again during a 10-minute period. The triathlon concludes with a shuttle run competition in which two cones are placed 20 metres apart, with the athletes collecting points for each completed back-and-forth shuttle over the course of five minutes. The points scored in each event will be tallied to crown the overall winner.

The hour-long event gets underway at 5pm CEST (weather permitting) and will be broadcast live on the World Athletics YouTube channel, Twitter feed and Facebook page. It follows two hugely popular editions of the Ultimate Garden Clash last month that featured the world's best pole vaulters, the first ending in a tie between Renaud Lavillenie and Armand Duplantis and the second won by Katerina Stefanidi.

“The format will be a little demanding, because we are not used to the [endurance aspect] of it," Mayer said. "We are ‘sprinters’, endurance is harder for us. I don’t know how it is going to be, but I think Niklas will be good at that and we’ll have to fight against him."

Like in a decathlon, Mayer believes that the last event will be the toughest.

“I think the three of us know that the last part will be the hardest. I’ve not done this particular ‘discipline’ in my life, but I know it’s going to be hard. With the marks at 12 metres and 4 metres in the shot put and pole vault, I think these are going to be easier for me.”

Kaul is also looking forward to the challenge.

“It’s really good because it’s something different than just training," said Kaul, who at 21 last year became the youngest world champion in the decathlon. "I’m really looking forward to compete with the other two guys again even if we are not in the same country. It’s going to be a lot of fun.”