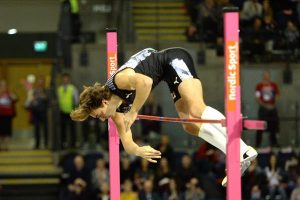 Armand Duplantis’s world pole vault record of 6.18m and Ababel Yeshaneh’s world half marathon record of 1:04:31 have been ratified.

Sealing the victory at 5.94m, he continued with a first attempt clearance at 6.00m before having the bar set at 6.18m. Once again he sailed well clear on his first attempt.

“I felt like I was over it and once I was going over I knew I had it,” he said. “You can’t tell how far away you are from the bar but it felt like a good jump from the get-go.

Yeshaneh took command shortly after the two passed 15 kilometres (45:38), eventually covering the second 10 kilometres segment in 30:54 before forging on to a commanding victory.

“I didn’t imagine this result,” said Yeshaneh, whose previous best of 1:05:46 had stood as the Ethiopian record for a five-month period between 2018 and 2019. “I am a world record holder!”