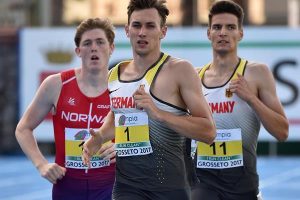 Niklas Kaul’s world U20 decathlon record of 8435 has been ratified, following validation of the post-event surveys that had to be undertaken at Grosseto’s Carlo Zecchini Stadium.

His day-one tally of 4170 put him in third place at the end of the first day behind Estonia’s Johannes Erm and France’s Ludovic Besson, but Kaul had some strong events to come on day two.

“I’m really happy, I was not expecting to go over 8400 points – it's just amazing,” said Kaul, who went on to win the senior world decathlon title in 2019, just two years after his record-breaking feat in Grosseto. “This is the best way to end the season.”