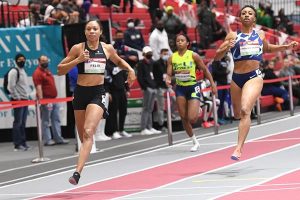 Eighteen years, 11 world titles and six Olympic gold medals later, the 35-year-old returned with 22.59 to the banked oval  for the fourth American Track League fixture in Fayetteville – a World Athletics Indoor Tour Silver meeting – and, as she so often has done during her glittering career, emerged the winner.

Felix’s winning time smashed her previous PB (23.14) and moves her to 18th on the US indoor all-time list. It’s also the fastest ever indoor 200m by a masters (35+) athlete; no one else that age has ever bettered 23 seconds.

“It feels good to be running again, it’s been a long time,” said Felix, who will be targeting the 200m at the US Olympic Trials later this year. “The 200m is one of my favourite races, so I just wanted to have some fun. We’re still working hard; the big goal is much later this year.”