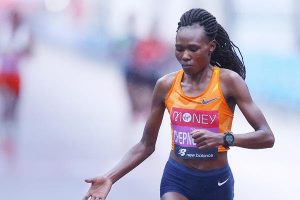 The 26-year-old Kenyan, a winner of this race in 2017 and 2019, broke away from Ethiopia’s Yalemzerf Yehualaw in the final stages to win by 38 seconds.

Chepngetich, Yehualaw and Obiri were part of an eight-woman pack in the early stages, passing through five kilometres in 15:07.

That group, which also included marathon world record-holder Brigid Kosgei and fellow Kenyan Joan Chelimo Melly, had been whittled down to five by the 10km marker, which was reached in 30:21.