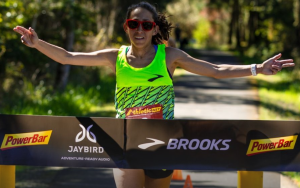 Desiree Linden has become the first woman to run 50km in under three hours, breaking the world best with 2:59:54 at a specially-organised event in Oregon, USA

The event – named the Brooks Running 50km & Marathon – had been organised by Linden’s sponsor and her agent, Josh Cox, when her original plan of racing the Two Oceans ultramarathon in South Africa was cancelled due to the pandemic.