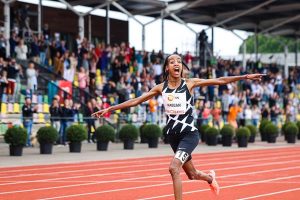 Racing at the FBK Games – a World Athletics Continental Tour Gold meeting – Back in the stadium where she set her European 10,000m record of 29:36.67 last October, Sifan Hassan continued to make history by smashing the world record with a time of 29:06.82* in Hengelo

On world record pace from the start, Diane van Es and Jackline Rotich star began fast, however Hassan was clearly wanting to push the pace.

She went through halfway in 14:38.75 and continued to get quicker, running a 2:45 final kilometre and lapping the entire field which included seven other athletes who would go on to achieve the Olympic qualifying time of 31:25.00. Crossing the finish line with 29:06.82 on the clock, Hassan raised her hands to the air and then sank to the track in delight.